Back by Popular Demand! Last summer, I tasked the CBP Design Team to create a wedding invite for a TV couple they loved. It was such a fun project, and we adored hearing from our IG friends who had such strong connections to these small-screen sweethearts. So, in honor of Mother’s Day we’re back with a similar assignment… Welcome to the Personalized Stationery Design Challenge, the TV Moms’ take!

Think Project Runway for paper, without the unconventional materials or the accessories wall. Each designer at the Cheree Berry Paper office was charged with picking a TV mom, past or present, and creating stationery for her. Just in time for Mother’s Day! 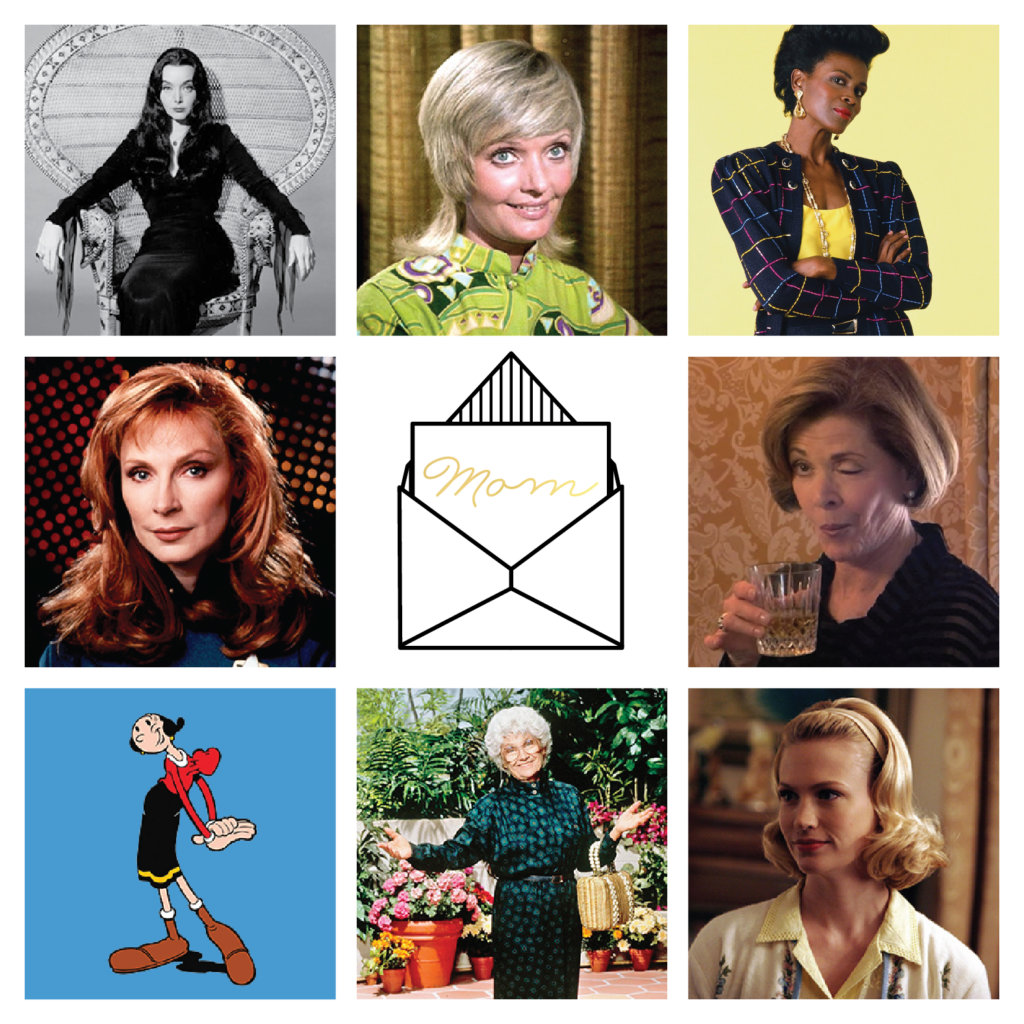 I think the label of “mom” comes with a lot of presumptions and Morticia seemed to break the mold. Morticia is described as “The real head of the family…low-voiced, incisive and subtle, smiles are rare…contemptuous and original and with fierce family loyalty.” I like that she is often the calm center of the chaotic events of the household. With her unique gothic style and overall vibe, I pictured her writing with a black-feathered quill in gothic calligraphy. 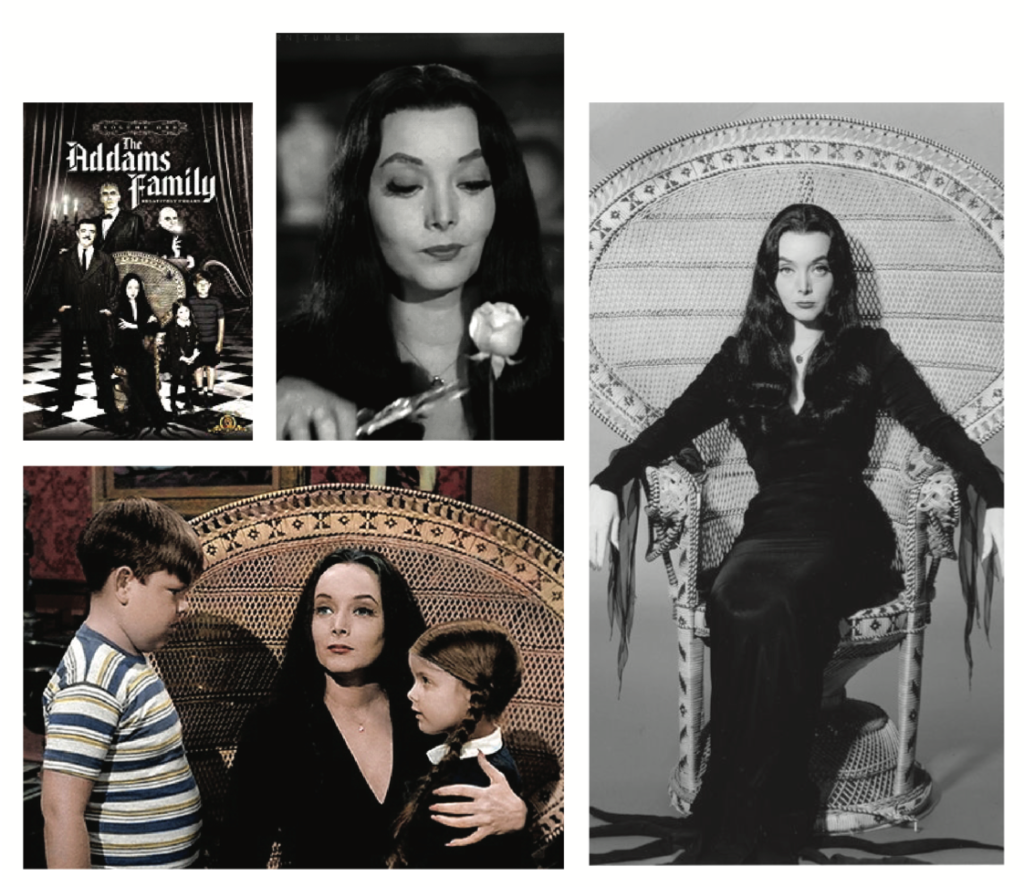 The gothic typography is inspired by the show, but I added a feminine touch with the addition of the roses and thorns. I liked how the overall shape of the stationery is unexpected like Morticia.

The envelope addressed to “Grandmama” is the address of the real house where the show was filmed. 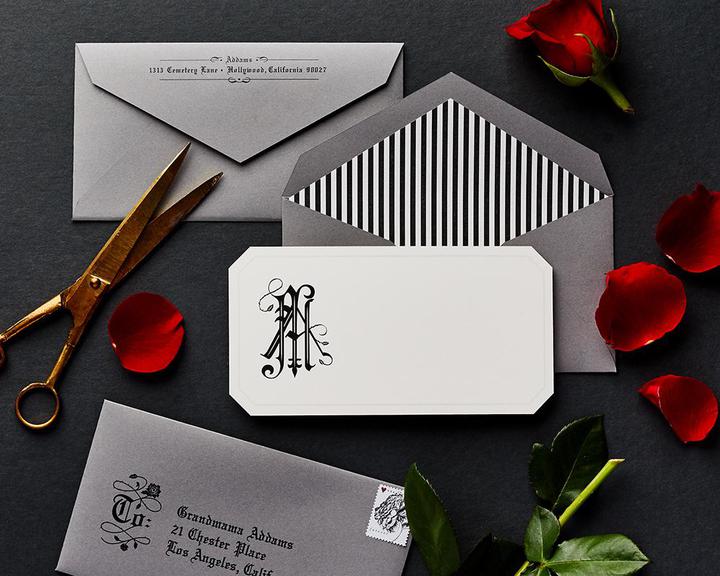 My siblings and I loved the Brady Bunch when we were little. I was inspired by Carol’s character as a liberated woman for her time. Although a stay-at-home mom, she was much more than a homemaker, she was a freelance writer, a sculptor, a political activist, and a singer. And to know her is to love that she enjoyed corny jokes, gently teaching her six children life lessons, and finding clever ways of zinging her husband. For this project, I focused on some of her favorite things including a large terra-cotta vase, dangly earrings, and pattern jumpsuits. 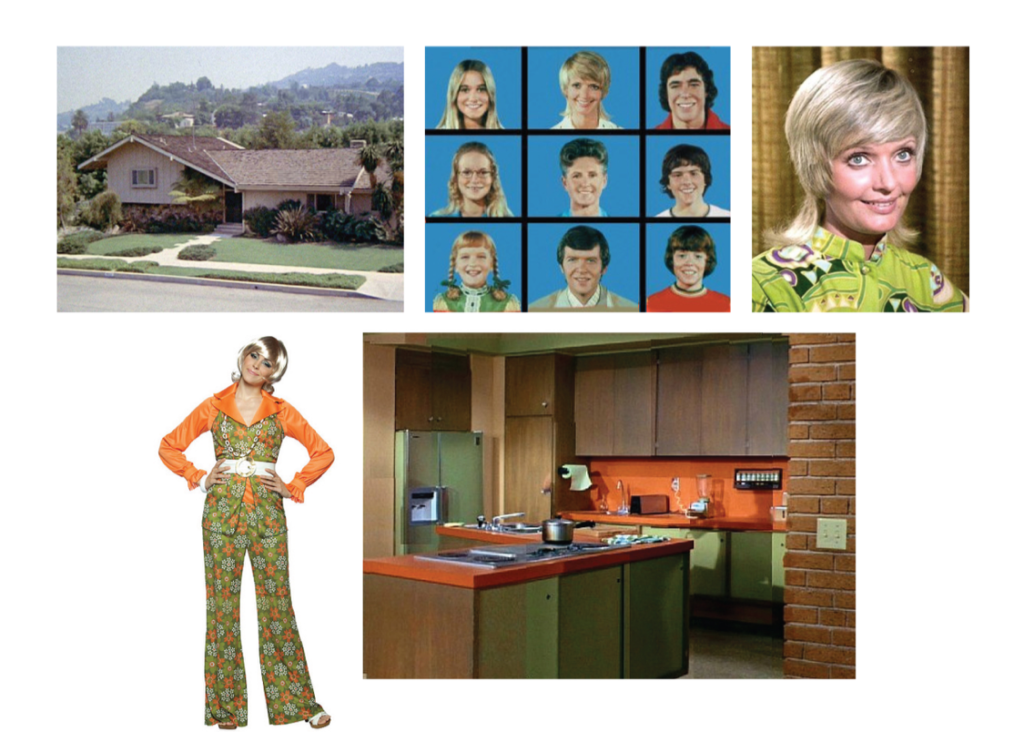 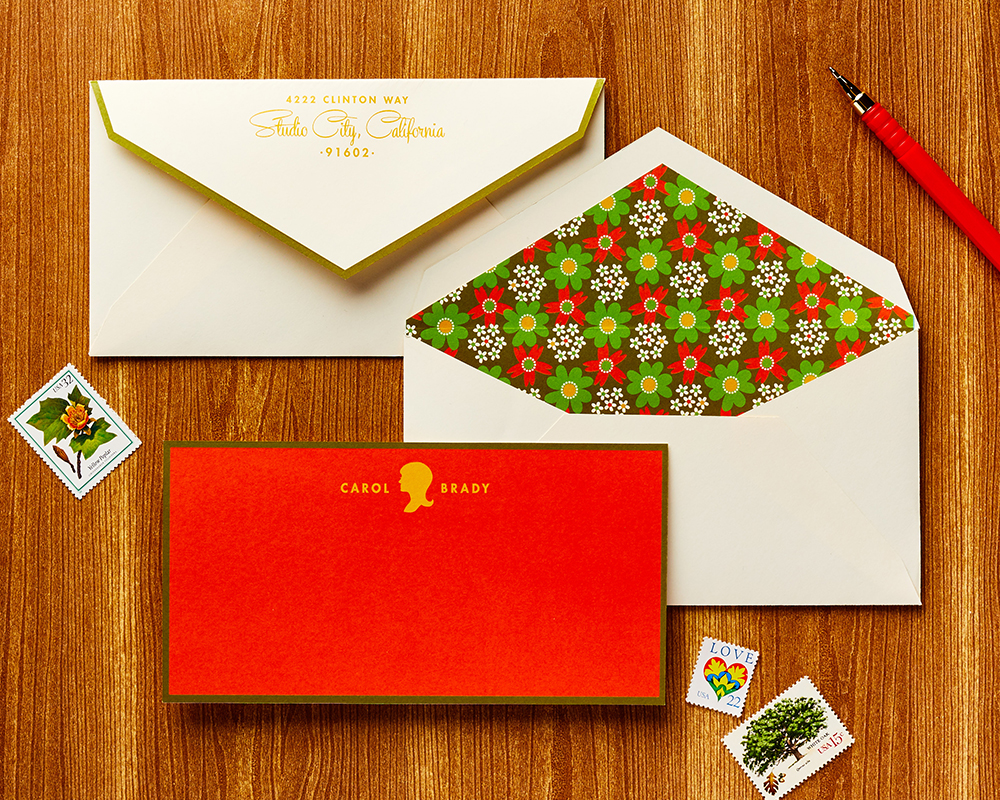 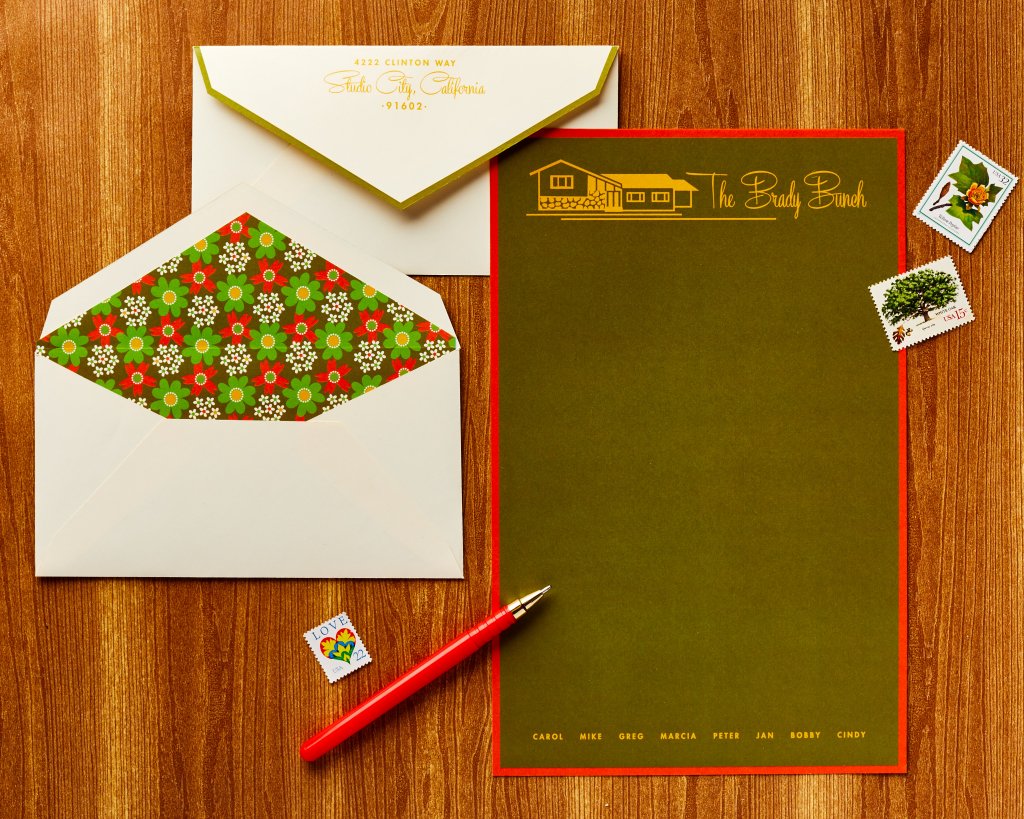 The second design is a nod to classic mid-century letterhead with a drawing of their house at the top, the entire Bunch–all the family member’s names along the bottom, and plenty of blank space in the middle for Carol to fill with daily correspondence! 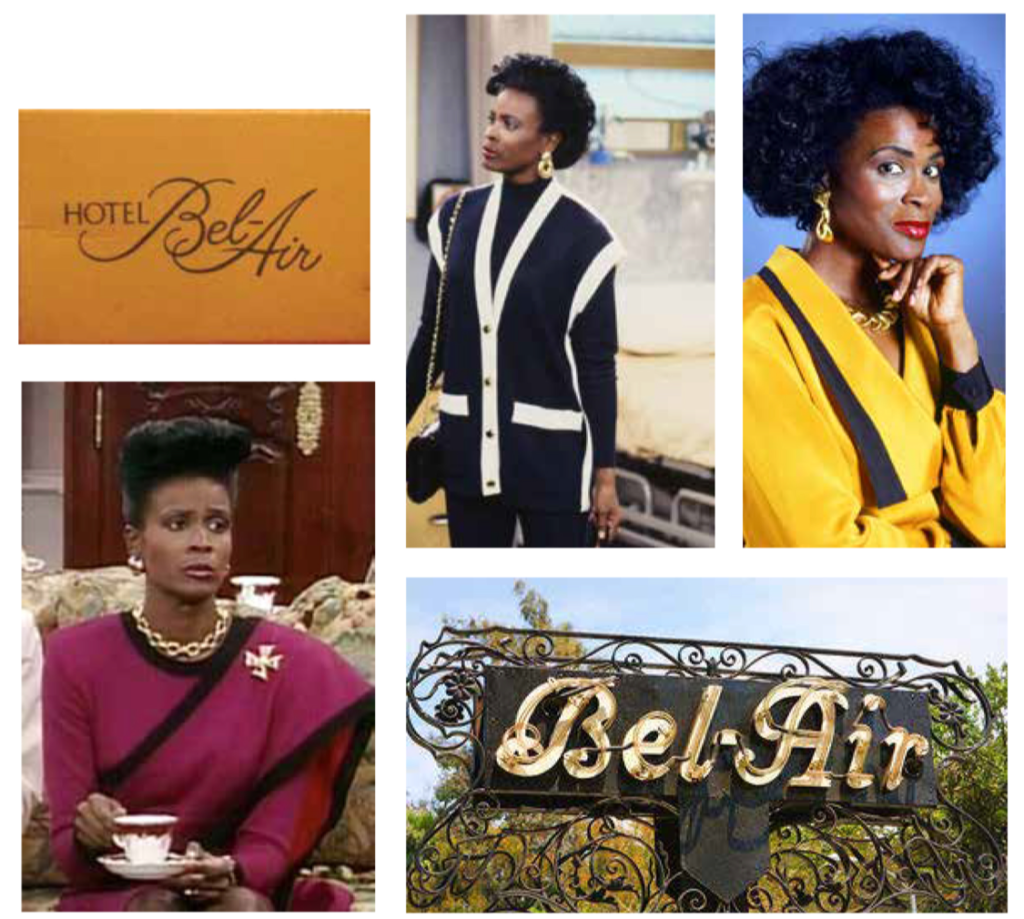 Vivian has great style and I CAN recite the entire theme song from the show! She is also strong, independent, successful and fierce! Her parenting style strikes a perfect balance of nurturing meets intimidation. Can we say Tiger mom? 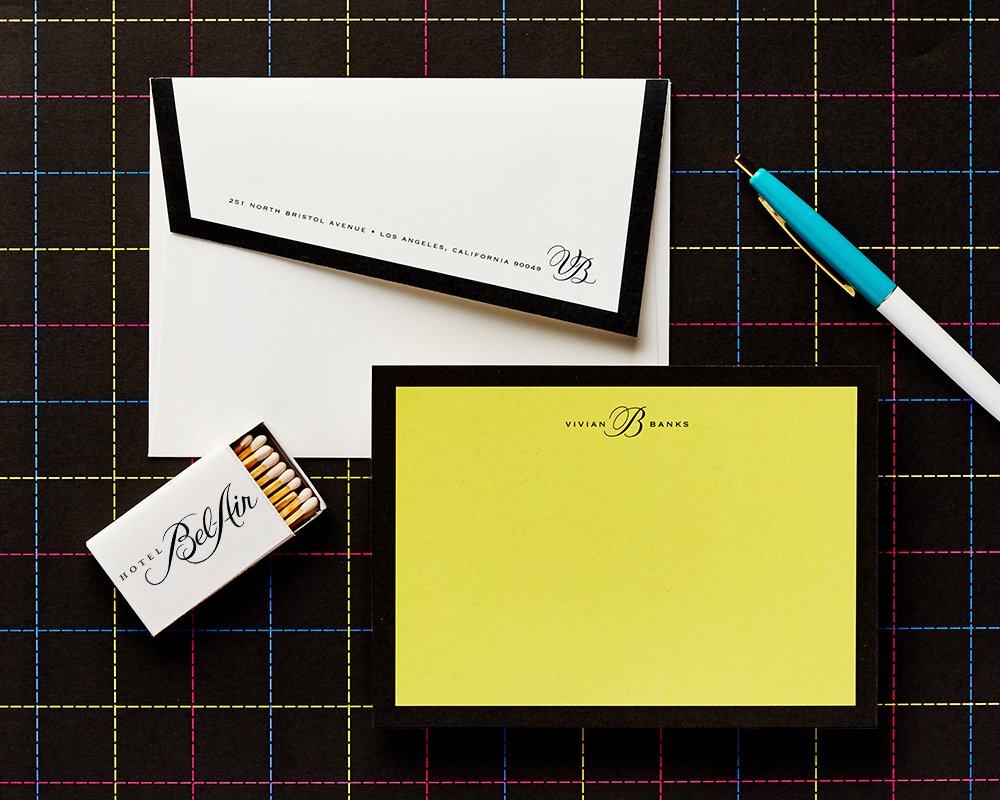 I created an asymmetrical piped envelope flap inspired by the ‘80s and Vivian’s wardrobe. The card color also relates to her clothing. A side note, there were two “Aunt Vivs” on the show, each doing three seasons. I based my design on the original Aunt Viv!

When I was growing up my mom, sisters and I watched Star Trek: Voyager. It was one of the few shows that we all really loved. It featured a strong female lead as the captain of a star ship. And it fostered my love for the stars, stories and science fiction. On a special mother-daughter date, when I was eleven, we went to see the movie Star Trek: First Contact. I remember being frightened by the Borg and excited about a new cast of characters. One of which, was Dr. Beverly Crusher, who was raising her son and working full time while traveling through space. 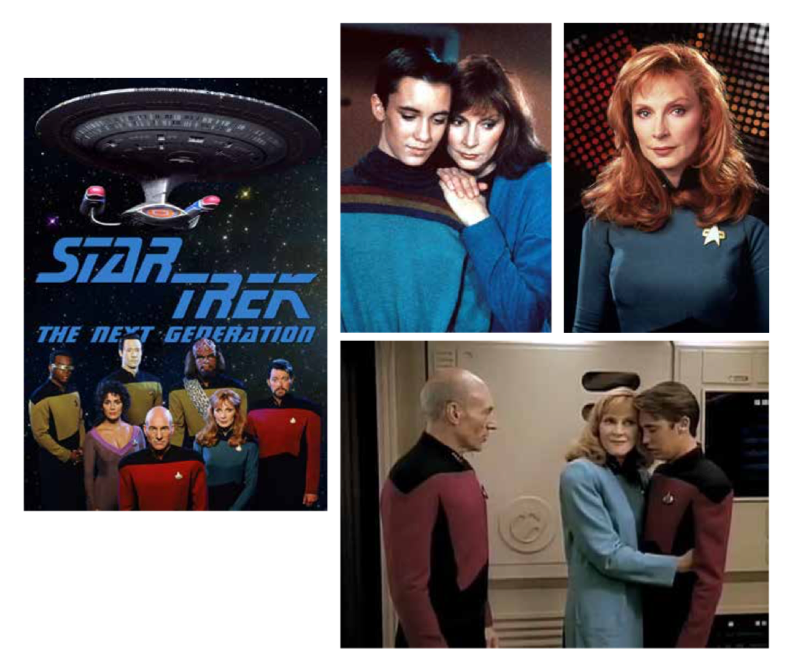 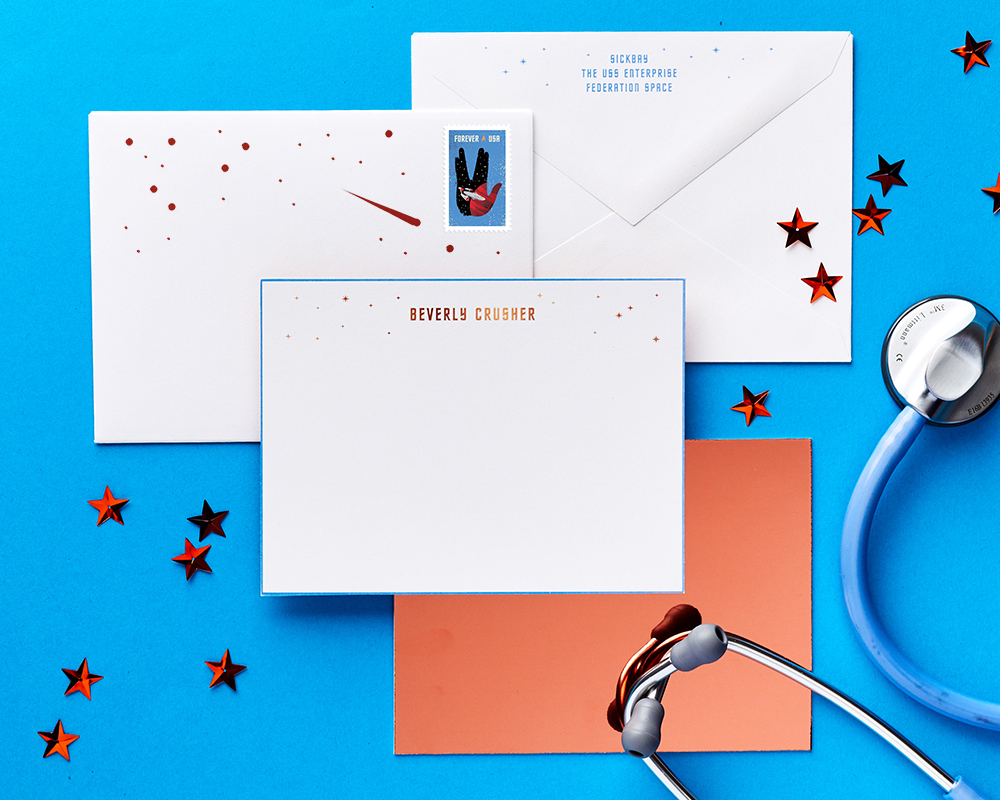 The die cut shapes in the envelope allow the copper mirror backer of the card to show through and creates light-catching stars and comets. Beverly’s red hair color inspired the copper paper and the blue accent compliments her medical officer’s uniform. The font for her name, you could say, is Trek-ography.

She’s not your typical damsel-in-distress character.  I like that she’s scrappy and fights to defend Popeye. 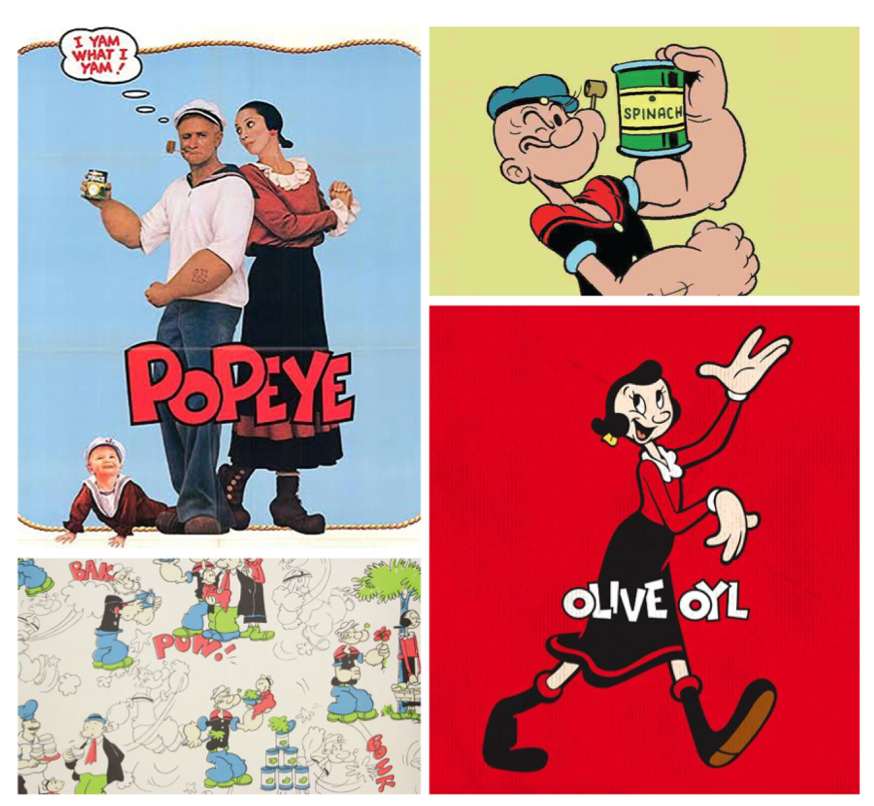 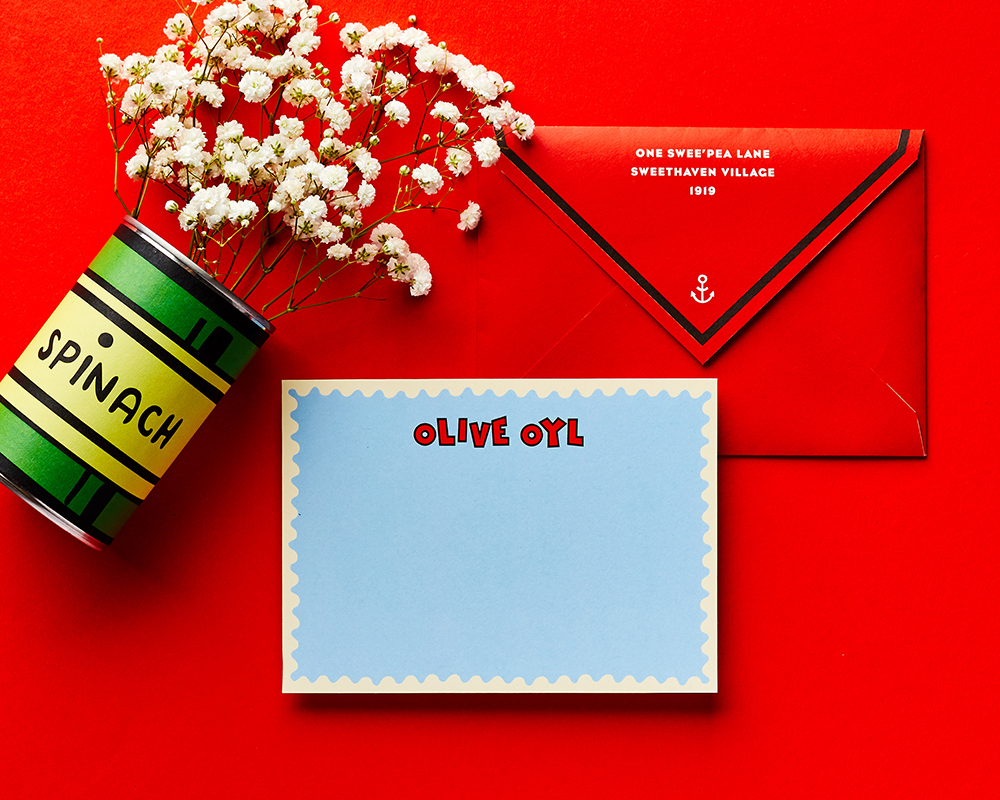 Pulling from Olive Oyl’s fashion, the rickrack border was inspired by her skirt and collar. And with Popeye in mind, the tiny anchor icon matches his tattoos. The set wouldn’t be complete without a spinach stamp!… You know the tune.

Sophia has such a distinct personality and style that I thought she was the perfect mom muse for my stationery design. I wanted to incorporate her well-known wicker basket purse that she carries in all the episodes and bring in some fun ‘80s Miami details. If you didn’t watch the show, she was quite vocal, kooky and quick to complain, but also very caring and loved Rose and Blanche as if they were her own. 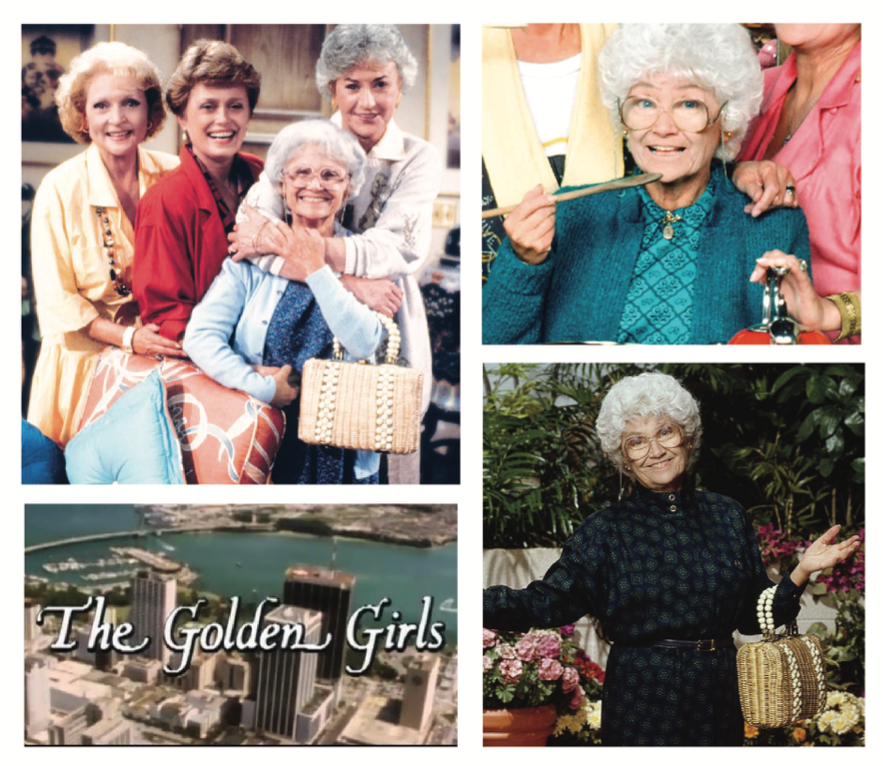 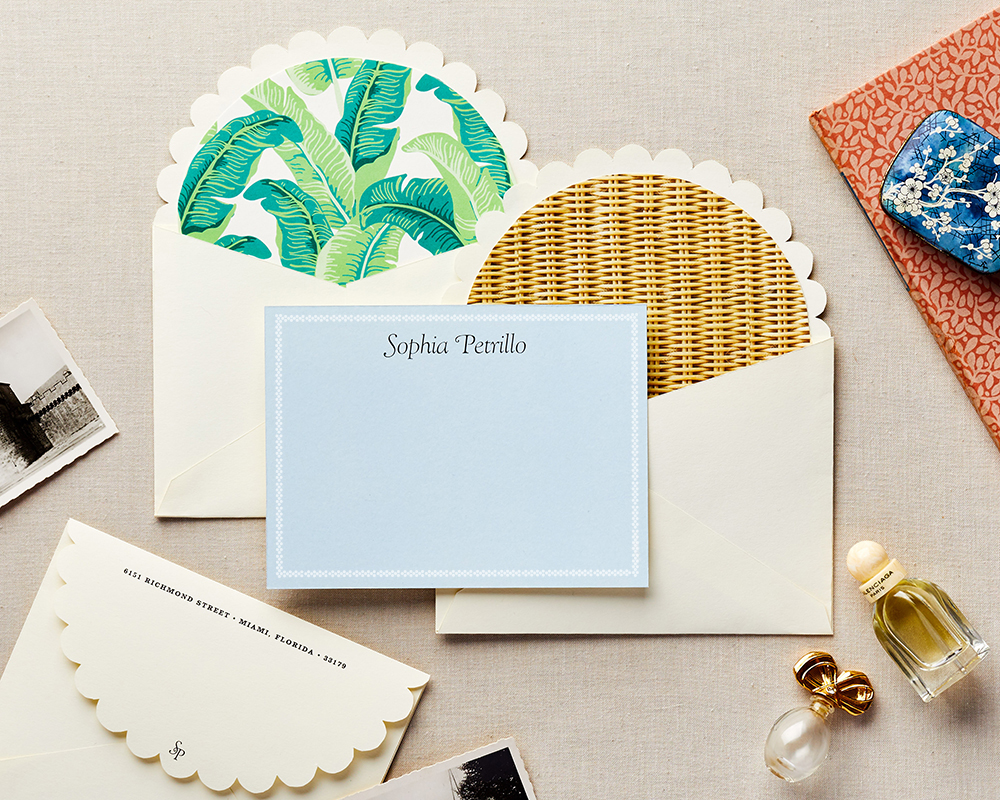 The grandma-chic design is inspired by Miami color palettes of the ‘80s-90s, and her iconic wicker purse (that I secretly want!). Other purse influences include the scalloped envelope that mimics the handles and the dot border and envelope liner. The type is influenced by the fonts in the show’s opening credits.

Mad Men is such a binge-worthy show. I love Betty’s style and how it changes over the course of the series, from Grace Kelly to Jackie Kennedy. I chose to create stationery for “Season One” Betty as a young housewife with two children living in the suburbs of New York. 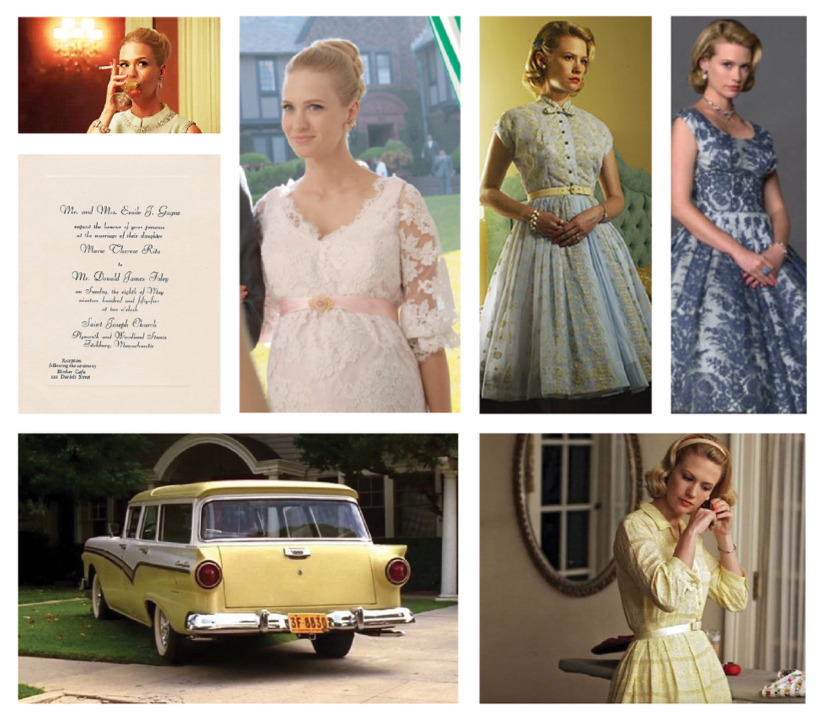 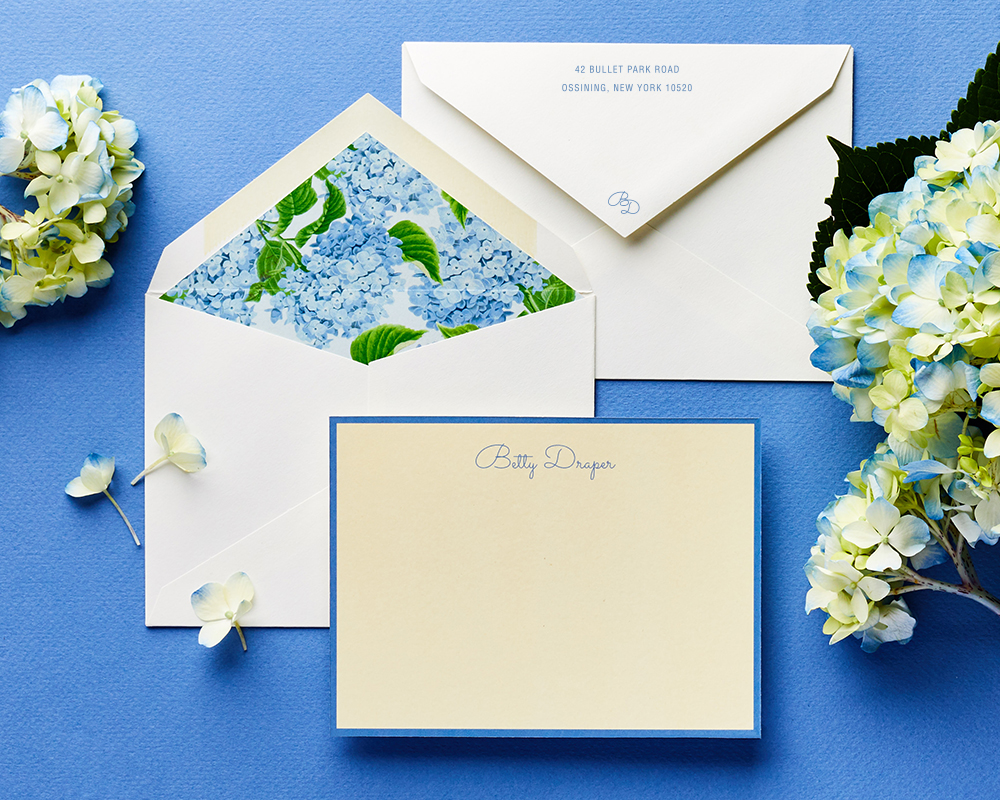 For color, I was inspired by her large collection of feminine, floral dresses in soft pastel yellows and icy blues. I also thought yellow was a great color to represent her golden hair and her yellow car.

As for type, I chose fonts that were popular during that time, as Betty would have wanted to keep up with the latest. The script font was inspired by classic, formal invitations and Helvetica on the return address was created in 1957 and had a huge impact on 1960’s advertising (a nod to her ad exec husband, Don).

I chose Lucille Bluth because she’s just so dramatic and ridiculous. Not a great mom as she’s selfish and rude, but very entertaining. If you watched the show, there is a detail an inside joke detail on the envelope. The eyes come from a scene when she mistakes the drowsy eye on her pill bottle as a winking eye, and proceeds to not-so-subtly wink at people throughout the series. 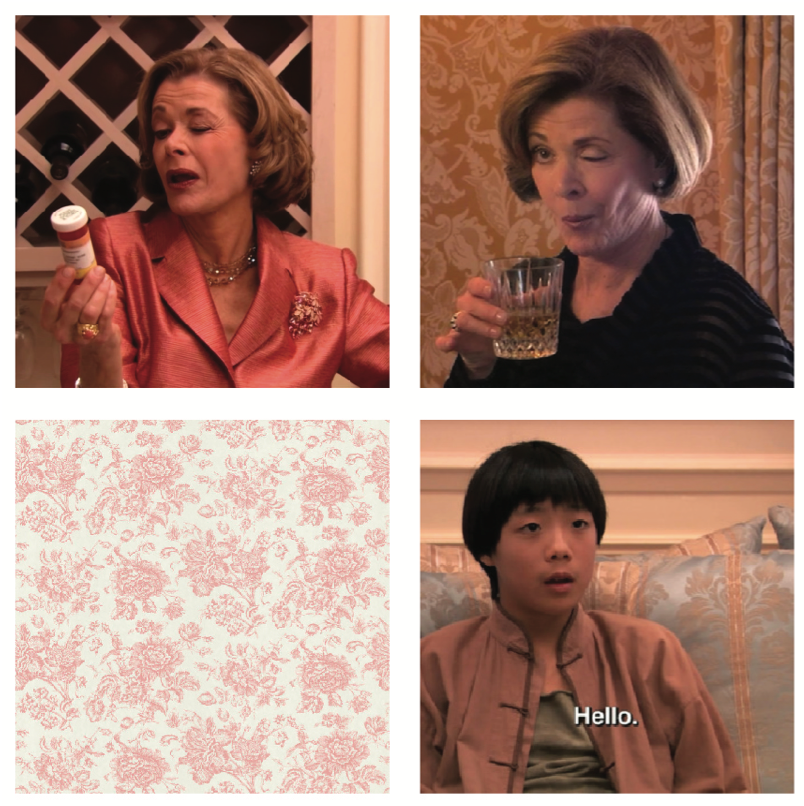 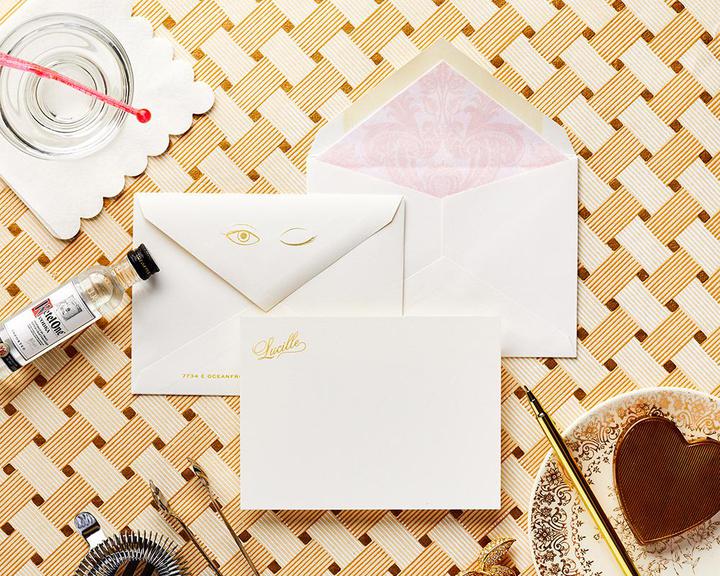 Using the interior of her house for the color scheme and the wallpaper for her envelope liner, the vibe is like the perfume that gives you a headache with a touch of elegance!

Customize your own personalized stationery set with bold monograms, patterned  envelope liners and even custom illustrations. And, don’t forget to message us on Instagram if you have any suggestions for the next designer challenge! 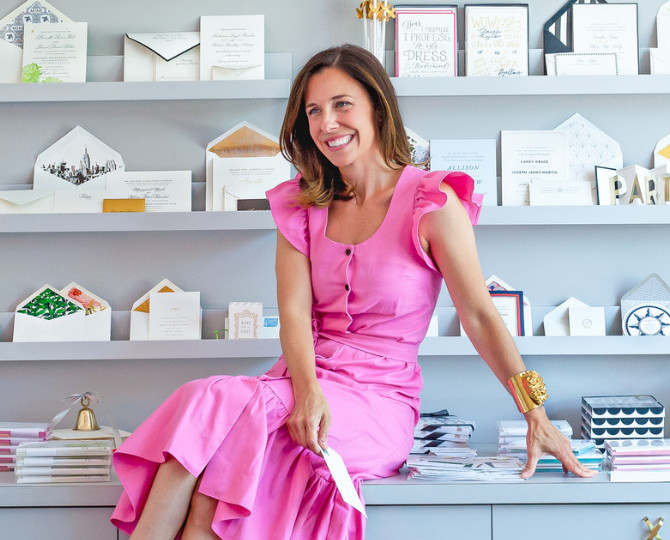